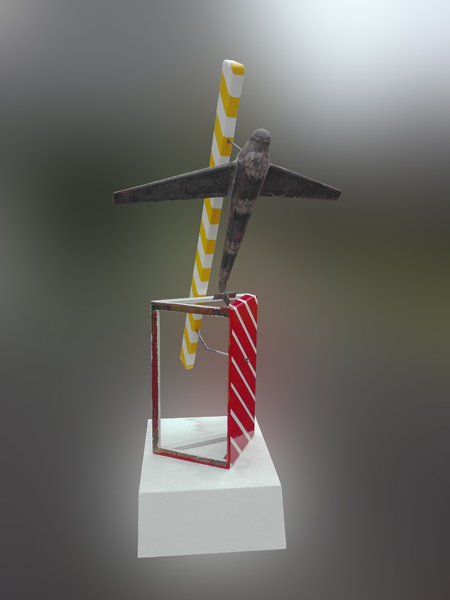 Man’s wish to fly is old: remember the story of Icarus and Leonardo Da Vinci’s drawings.

The title of this work refers to the pioneering days when planes were developed and we began to realize that flying was really possible. Man’s genius had taken another hurdle – what a wonderful feeling.

How different are things today: planes and airports have become targets of religious and/or political terrorism. The attacks on the Twin Towers in 2001 and on Brussels Airport in March 2016 are just two horrible examples. The plane, once a symbol of hope, of quasi unlimited opportunity and freedom, now carries a bitter and ominous connotation.

Aeroplanes shows the plane as a crucifix – a reference to religion, but more generally also to ‘believing’. The statue looks a bit like a human figure. The stripes symbolize ‘demarcation’ and remind us of the procedures, rules and regulations typical of aviation. Note that the plane is tilted forward, a position that suggests a crash, which, however, is stopped by the yellow-white beam.