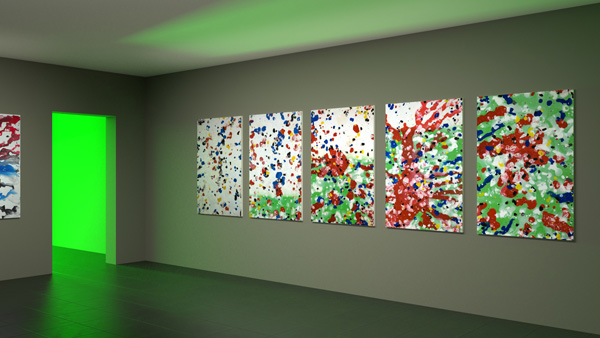 In this series the artist uses Piet Mondriaan’s ‘Composition C no. III’ (1935) as a starting point. Mondriaan’s coloured areas are replicated in a silicone mould, which the artist fills with coloured water. The mould is then frozen. In his research the artist uses ice water to make paintings, the different versions of which you can see below.

Piet Mondriaan evolved from impressionism via symbolism to pure abstraction. With his compositions of primary colours he wanted his work to rise above natural beauty and create ‘absolute beauty’. Every sign of naturalism, every movement and depth gradually disappeared from his oeuvre.

The title of this series refers to a counter movement. Mondriaan’s purified work regains its natural character and form by using coloured ice plates:

In the series Back to Nature with Piet Mondrian No.2 and No.3, the ice plates were smashed on the canvas, the ice melts and coloured water spontaneously found its own way on the canvas.

In the series Back to Nature with Piet Mondrian No.1, the ice plates were placed on the canvas, the ice melted and coloured water spontaneously found its own way on the canvas.