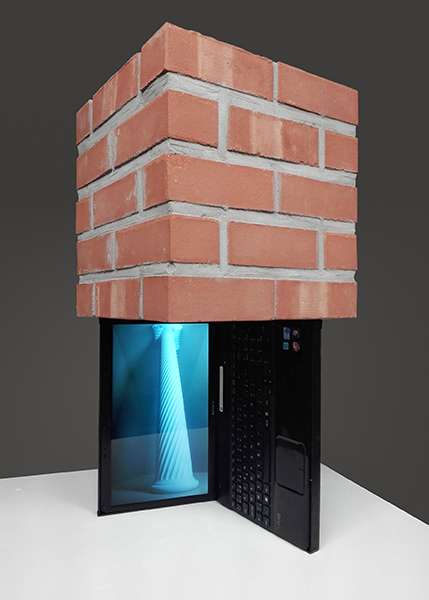 Atlas, in Greek myth, is sentenced by Zeus to kneel at the edge of the earth and carry the sky, Uranus, on his shoulders. Atlas carrying a big ball, as if he supports the world, is an enduring image in European art.

The artwork The Digital Age is not unlike Atlas’ story. On the screen we see a laptop and a 3D animation of a twisting column – just like Atlas – carrying the world, here shown as a block of bricks.

What is the meaning of the world and what is man’s place in the digital age? A block of bricks similar to this one is used in the Minecraft game to build a virtual world. But in the artwork, the block of bricks and mortar still has real weight. Should Atlas fail and let go of his ball, it would be destroyed and fall to pieces. Atlas therefore combines great responsibilities with real power.

What the artist wants to show here is that, maybe, in our world too, everything is topsy-turvy. Virtual matter and a shell with miniscule chips carry real matter, while we sit and watch, glued to our tv screens. To which extent are we building a virtual world? Digital processes replace people: what does this mean in terms of power and responsibilities? The pillar in the clip turns and turns. Why? Is it to preserve its power, or is a power that can reflect on its own behaviour?

When the digital world fails under the weight of the block, airplanes crash. The virtual reality disappears in a flash, reality is restored and transformed. What remains is a crushed laptop, an archaeological find.

Other works with brick: